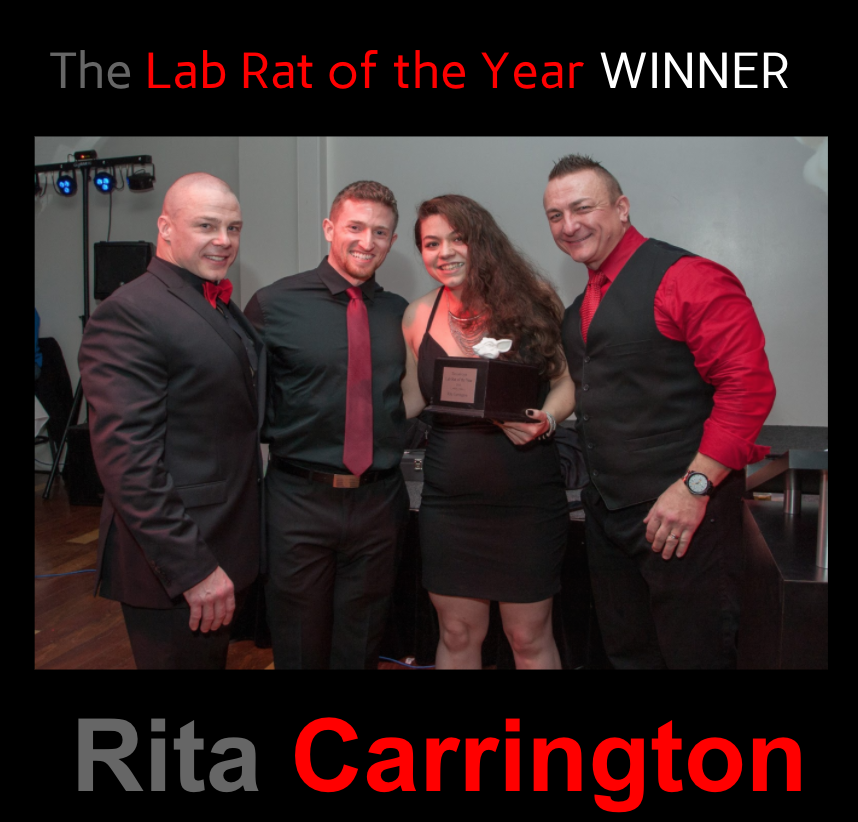 We are SO excited to finally announce the 2016 Lab Rat of the Year Winner: Rita Carrington!!!

Read her story below:

“Rita has changed in so many ways since joining the Lab.  Her time here started as a job, but has turned into a major life changing experience.  Not only has Rita lost 70+ pounds, but she has packed on some serious muscle, strength, and a huge change in personality and attitude.

When she started at the Lab Rita weighed nearly 230 pounds, had never lifted weights, and was very shy, quiet, nervous, and unsure.  Since then she has done a little of everything that we have to offer.  She now weighs 160 pounds and is continuing to drop weight, she has quit smoking, and she is one of the happiest, most positive people to be around.

She started out with some one on one training and has since done small group training, crossfit, weightlifting, and powerlifting.  Not many people can say that they have used every method possible at the Lab, but Rita is one of them.  Not only has she tried them all, but she has had great success at all of them and has continued to progress even while having to do many of her workouts on her own now.

She works her butt off all day long to try to take care of the trainers and the gym and will always go out of her way to make the best of every situation.  Rita is also a single mom, raising a special needs child.  She has made a couple long overnight drives for her family that left the car rental people in shock and disbelief on how many miles she was able to put on the car overnight, while still showing up the next day at the gym to get her training in on no sleep because she never wants to miss a day.

This year Rita has competed in her first 2 powerlifting meets, just months apart.  Her first meet she made every lift she attempted despite having an injury just a week before the meet.  She showed up super nervous, but stepped up and had a perfect day anyways.

At her second powerlifting meet, only 3 months later, she almost dropped and entire weight class weighing in almost 15 pounds less than her previous meet.  She went on to then and PR her bench press, deadlift, and total, while barely missing a PR squat.  She totaled 40 pounds more than her previous meet and increased her wilks score by 30 points.

Some of her best lifts are a 235 pound squat, 165 pound bench press, and 325 pound deadlift!  She is definitely not done yet and has her eyes set on another meet and a new weight class in a few months.

Rita is also one of the best cheerleaders at the Lab.  She is always the most excited person in the room when she hears about someone else’s great successes.  She’s constantly cheering on other lifters during group training, crossfit. and at competitions.  She has a very infectious smile and positive attitude and has even mentioned that she may have a superpower that she can make anyone smile just by smiling at them.”