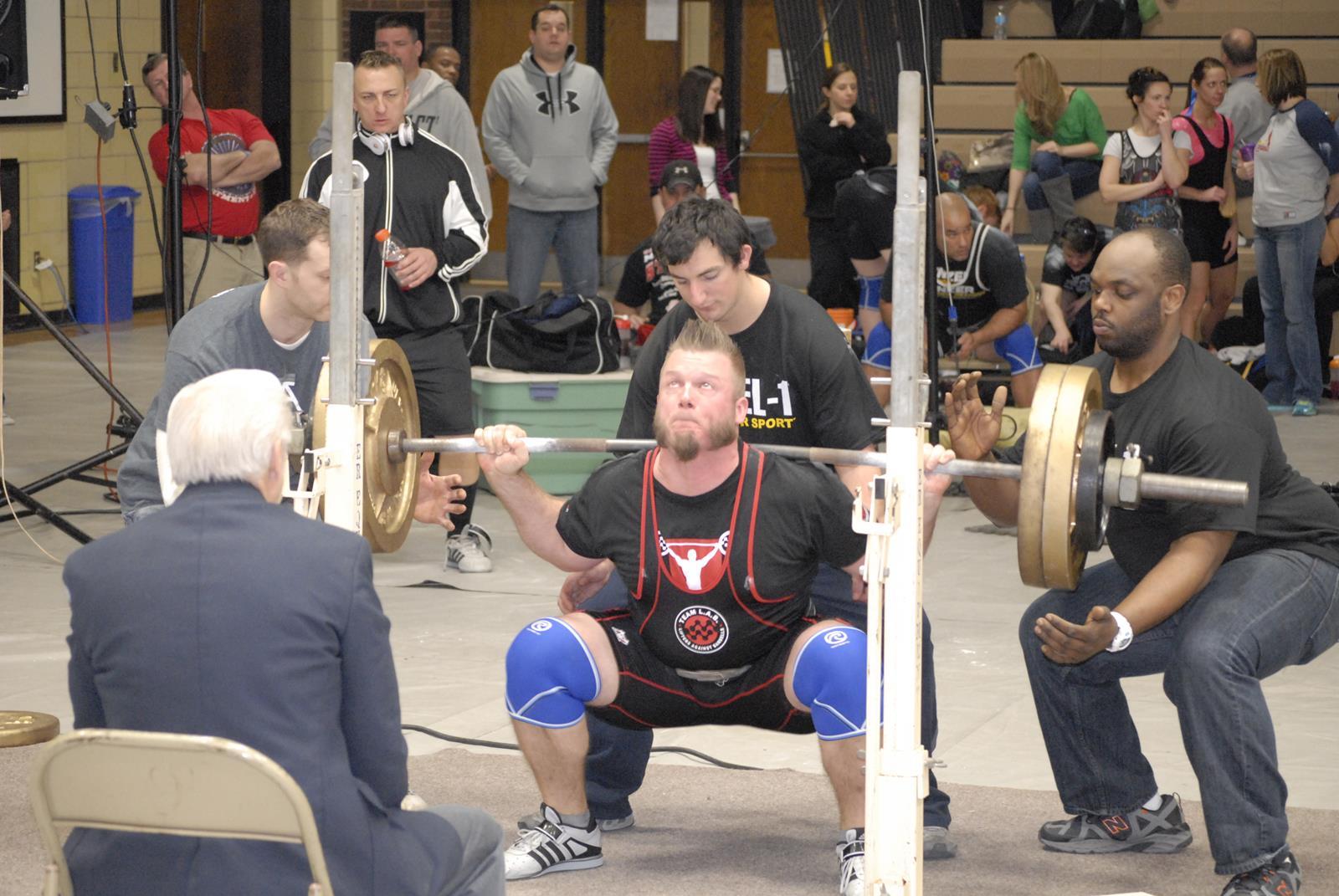 Saturday, March 23rd marked the 39th Annual Missouri State / Ozark Powerlifting and Bench Press
Championships sanctioned by the USAPL*. This weekend’s competition saw more than 110 lifters come in from all over the country looking to compete against Missouri’s finest, which is known to have some of the strongest athletes. Throughout the day MANY new American records were set by men, women and children. Lifters such as Nick Weite,
who set the new American Record for total weight lifted in the 275 equipped class with a total of 2336 lbs.
Spectators also enjoyed watching records set by an 11 year old boy and a 75 year old grandmother.

This meet was the debut of Team LAB in a powerlifting meet. Team LAB had a strong first meet
with medals won by each individual that participated. Michelle Cybulski competed in the women’s 132
lb class, unfortunately missing her weigh in for the 123 class by 1 pound. This was Michelle’s 1st powerlifting meet and completed 8 out of 9 attempts finishing with a 225.5 lb squat, 126.5 lb bench and 286.6 lb deadlift for a total of 638.6 lbs lifted! She finished in 2nd place in a crowd that weighed much more than she did. Great job Michelle!! Next on the platform was 220 lb weight class competitor Chris Thacker. Chris completed 4 out of 9 attempts, with a 525 lb squat, 315 lb bench press and 528 lb deadlift, totaling 1368 lb which resulted in a 1st place medal and some
individual meet records. When asked about his performance, Thacker remarked, “I take it, but I had my
sights set on some bigger numbers”.

Following the 220 class was Powerlifting Veteran Matt Swanson in the 242 lb weight class. Matt went 8 of 9 attempts resulting in a 532 lb squat, 330 bench and 611 lb deadlift for a total of 1473. Matt’s deadlift fell just a few lbs short of a state record. Matt has recently transitioned from equipped to RAW lifting, everyone can expect to see big things from him in the future!

Last weight class of the day? Super Heavy Weights! The super heavy weight class is always known
to produce some of the world’s most notable lifter’s. Jeremiah Patton represented Team LAB in his 1st
powerlifting competition and finished up in a solid 3rd place. Jeremiah went 6 of 9 and finished with a total
of 1210.8. Big kudos to Jeremiah for pushing to organize Team LAB’s first powerlifting meet. Thanks
for the push J.R.! After observing a local team win the Missouri Team State Trophy, Patton confidently
remarks, “next year that is ours!!” Congratulations to Team LAB and its Powerlifting Team! It was a great weekend and a lot of fun.

*The USAPL is recognized as the only drug tested powerlifting federation in the United States. Powerlifting is comprised of three lifts, Squat, Bench and Deadlift. To determine the winner of a specific division and weight class a total of all three maximum lifts completed are added together to give a total score. Competitors can compete in two different areas of competition; equipped and raw. Equipped utilizes the use of squat suits, deadlift suits and bench shirts made of a very tightly woven polyester cloth that helps constrict the body and assists through the sticking points or the hardest parts of the lift. Knee wraps are also allowed for squatting in equipped lifting, which will constrict
the knee and again assist in the through the hardest part of the lift. Regardless of this assistance gear,
the athlete must still finish the lifts or lock out which does require the appropriate amount of strength
to support the attempted weight. RAW competitors are scored the same way but without the use of
assistance gear such as suits and knee wraps. RAW competitors can use knee sleeves which aid in
keeping heat in the knees for greater knee function. Both the equipped and the RAW competitor is
allowed the use of a belt and wrist wraps. Weight classes range from 97 lbs women’s class to men’s
super heavy weight, which is 275 lbs or more. There are divisions for Teen, Masters and Open classes.