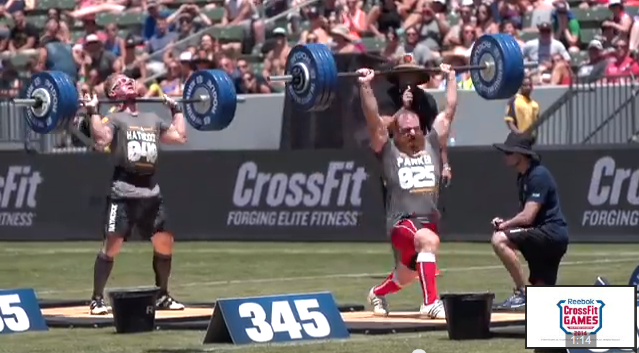 If you are new to CrossFit and have no idea what the “Open” is, this video is a great place to start! The road to the CrossFit Games, a multi-day tournament where competitors face multiple WODs and are scored to determine each of the “fittest” man, woman and team on Earth, begins with a “World Wide Open.”

The Open is a series of five WODs, released over a period of five weeks beginning this year on February 27, 2014. Anyone may register and participate in the Open. Participants in the Open perform five WODs, released by CrossFit one at a time, one per week, and log their scores based on their performances. The WODs are revealed one at a time on Thursdays, and the participant’s score must be logged in by the following Monday. The participants with the top scores in the Open proceed to Regionals, and the participants with the top scores in the Regionals proceed to the Games!

Here is a great article that describes the CrossFit Games and the Open, including the schedule. Here are the key dates:

If you are already familiar with the Open, here is an article that describes the 2014 changes to the Open, Regionals and the Games.

You can go here to register for the CrossFit Open. The cost is $20 which is paid online to CrossFit. After you have registered, you can edit your profile to add Heavy Metal CrossFit as your affiliate CrossFit box. Registration is fast and simple.

HMCF coaches will be able to provide official judging for the Open and the Open WODs can be performed at HMCF. We are still working out the details, but expect Open WODs with official judging to occur on Saturdays once we get to “Open Season.” More details coming!

“Should I enter the Open?” Up to you! Some of our Metalheads have their sights set on Regionals or the Games either this year, or in future years after sufficient training. Some of our Metalheads plan to enter this year and next year, so they can compare how their performance changes and get the experience for later years when their training pays off. Some of our Metalheads just can’t get enough of the opportunity for someone to yell “3! 2! 1! Go!!” at them! There may be skills in any particular Open WOD that are beyond your capabilities right now – if participation in the Open this year will fuel your fire for success next year, then go for it!

“I’m over 40! Should I even bother with the Open?” Heck yeah! If you are 40 prior to July 14, 2014, you are considered a “Masters Athlete” for the Open and the Games. For more information on CrossFit Masters, go here. Now, if you are a highly competitive CrossFit Athlete who happens to be 40 or older, you can still go to Regionals if your performance in the Open gets you a spot with the other 20 and 30 year olds. However, there is a special Masters competition for the CrossFit Open, broken into 5 year age brackets beginning at 40 where you compete against other Masters athletes in your age brackets. There is no Regionals competition for Masters, but new in 2014 is a second round of competition (a Masters “Qualifyer”) for the top 200 Masters athletes in each age bracket. Learn more about it here. Masters workouts in the Open and Games are typically scaled for individuals 55 and older.

If you have any questions about the CrossFit Open, Regionals or Games, discuss them with your HMCF coach!